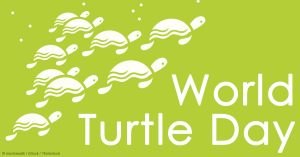 There are around 300 different species of the turtle. It is one of the oldest animals on the planet, dating back around 220 million-years-ago.

The turtle is considered a reptile. It is in the order of, Chelonii or Testudines. It is not the same as a tortoise, even though they both have shells.

In honor of World Turtle Day, we are going to explore all things “turtle.”

Read on to be totally turtle-fied, then be sure to take our quiz to see what you learned!

Where in the World?

Did you know some turtles live in the sea?

This reptile can be found in many parts of the world, where some of the climates are tropical, and others are not.

Depending on the species, some turtles live on land and will swim in bodies of water. The ones that live in the sea come up on shore to lay their eggs.

The Body of a Turtle

Did you know turtles can be very small or very big?

Depending on the species, a turtle can measure from 3.5 inches long and weigh less than a pound.  Other turtles tip the scale at 1,500 pounds and will measure in at 8 to 9 feet long!

The turtle’s shell is made up of two pieces; the upper and the lower shell is joined at the sides with a bony section.

The top side is called a carapace. This can be domed, low and rounded or flat on top with steep sides.

The bottom part of the shell is called a plastron.

Did you know the turtle cannot hear very well because it doesn’t have any eardrums?

The sense of sight in a turtle is very good. However, the turtle lacks nostrils, but it does have unique bumps under its chin called barbels. The barbels contain nerves that act as a nose to pick up lots of smells.

What a Turtle Eats

Did you know some turtles cannot taste their food? 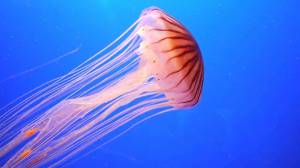 Depending on the breed of turtle, they can eat veggies, meat or both.

The turtle may eat plants that grow in the water, insects, worms, fish and even some dead marine life.

Sea turtles will dine on sponges, jellyfish, and algae.

Did you know the turtle makes a nest for her eggs?

A sea turtle travels back to the same shore it was born on, to build a nest. This nest is on a beach. The sea turtle digs out a hole with its strong flippers. Once she lays her eggs, the female covers up the nest with sand and returns to the ocean. 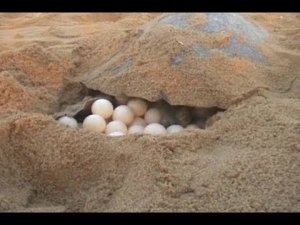 The female turtle can lay anywhere from 1 to more than 200 eggs at one time. These eggs can have either a soft or a hard shell.

The eggs can be stolen and eaten by animals like raccoons. If they make it, the eggs will hatch in about three weeks time.

Did you know baby turtles are left alone to survive?

Baby turtles do not have any protection from the adult turtles. When seas turtle babies hatch from their shells, they must make their way to the ocean. 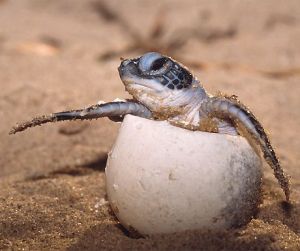 Birds will prey on baby turtles as they make this journey. Once in the ocean, seas turtle babies can be eaten by larger prey.

Some turtles can live to be over 100 years-old. Once a turtle makes it to adulthood, it has a higher chance of living a long life.

Turtles enjoy being around other turtles and may even engage in social play. 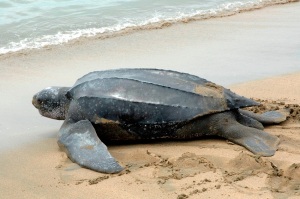 This is the largest species of the turtle. It can grow up to 2,000 pounds and be much longer than an average man.

This turtle has powerful flippers it uses to swim and to dig its nests with. Its shell is leathery, rather than hard and it can dive deeper than any other turtle – up to 4,035 feet!

This species of turtle is one of the largest of all the freshwater turtles. As its name suggests, this turtle is very aggressive on land. It will use its powerful jaws to snap at predators.

It hunts and eats mussels, fish, snails and water plants. After catching its dinner, the snapping turtle will use special hooks on its jaws to tear the food into bite-sized morsels.

This turtle is a stinky fellow. Like a skunk, when this turtle feels threatened it will release a foul-smelling odor.

It is small, measuring only about six inches in length, but it does have a big head that can produce a nasty bite. This turtle hunts for food by walking along the bottom of a pond or lake.

What do you think of these shelled creatures?

What do you know? Take the turtle quiz to see what fun facts you can remember.

How did you do on the Turtle Quiz?

Drop us a line in the comments section to let us know.