Have Alien Spiders Been Found on Mars?

Is there life on Mars?

Scientists have been hard at work for decades trying to find any life on the Red Planet. Could these “aliens spiders” be the sign they have been searching for?

Although there’s more carbon dioxide than arachnids at work here, these spider-like etchings on Mars are interesting.

According to NASA, these radiating mounds are caused by the heating of the carbon dioxide ice below the planet’s surface.

When the carbon dioxide changes from a solid to a gas, the gas becomes trapped. Over time a tremendous amount of pressure builds up. When it becomes too much, it erupts as a jet of dust.

Gas is then released into the atmosphere with darker dust been deposited around the surface holes left behind. When the wind blows, this dust produces streaks that resemble spiders. 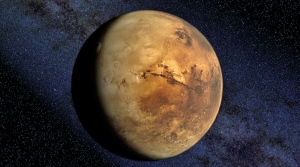 Even though these alien arachnids aren’t really spiders, this red planet is still super-fascinating. Check out these fun facts about Mars.

If it were possible, would you like to visit Mars one day? Tell us your thoughts in the comment section.