What Does a Magician Do? Interview With the Magic Hatter

Today we have a very special guest. The Magic Hatter is here to tell us all about his exciting career has a magician.

Q. Tell us a bit about yourself?

A. My name is Dan but I wear many other hats, and perform as characters called The Magic Hatter, Dr Teapot, and Ditto.

I went to a drama school and trained in children’s theatre before writing and directing the shows for a theme park, then running a drama company. I now work as a magician, a Giggle Doctor and also part-time at a magic shop. I’ve performed magic at birthday parties, weddings, stately homes, tourist attractions, and my own annual Christmas shows in a hired theatre.

I’m also interested in clowning to help others, and recently worked with the real Patch Adams (the inspiration behind the film starring Robin Williams) in Morocco, where we visited orphanages, schools, and hospitals. I’m now writing a book about entertaining children in hospitals, and creating a workshop for doctors.

I live in the historic city of York in the UK with my wife and two young sons, who are already showing an interest in magic and copying some of my jokes and routines!

A. As a child I remember watching British magician Paul Daniels, as well as David Copperfield’s television specials. I was fascinated by the impossible, seeing things float, magically multiply or vanish into thin air! But I think it was seeing a magician perform live at a theme park that made me think ‘wow, these aren’t camera tricks – this really can be done!’ Ever since then, I’ve wanted to create that same sense of wonder that I had as a child.

Q. How did you get started?

A. Like many magicians, it all started with a magic set one Christmas! I think I was six years old, and that box of plastic tricks and trinkets put me on the path to a magical career. I would perform little magic shows for friends and family in my garden, with a cardboard top hat and a table my dad made.

Q. What type of magic do you perform?

A. I mainly perform colourful comedy magic for stage shows and children’s events, but in hospitals the magic is one-to-one, so I use smaller close-up tricks. These could be tricks with cards, coins, sponge balls or even teaspoons, paper towels, and plastic cups. I have pockets full of props, but sometimes will use objects around me – creating what is called ‘impromptu magic’ where the audience know you aren’t using any special props or gadgets.

Q. Is it difficult to learn magic?

A. It can be, but I honestly don’t think it has to be. Many young magicians focus on learning complicated moves (called ‘sleights’) but forget that the real magic is in the entertainment, not the moves. There are many tricks that don’t require complicated sleight of hand (known as ‘self-working’ tricks) which are ideal for beginners, as you can concentrate on how to present them.

Q. Are there any “tricks” you can share to help the kids with being a magician?

A. The world of magic can seem overwhelming, there are thousands of tricks available to any budding magician. But there are actually only seven types of magic trick…

Magic shops will sell you props and DVDs that do one or two of the above, but magic books are absolutely jam-packed with ideas and routines!

Visit your local library and you might even find magic books you can borrow for FREE! Magic can be an expensive hobby, but books are a great place to start whilst you decide what style and type of tricks you want to perform.

When you’ve decided which tricks to do, and learnt them well, you can join several together to make a longer routine. My background in drama helps me create a storyline that links the tricks, like a golden thread to hang the magic on!

Q. What was it like the first time you stepped onto a stage to perform in 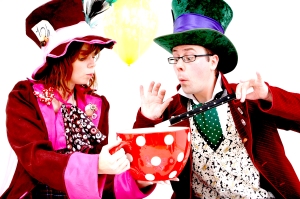 front of an audience?

A. Exhilarating! There is nothing quite like the buzz of hearing an audience laugh, clap, and cheer after being entertained by something you’ve created. It can be nerve-wracking too, but the more you perform (and practice!) the easier it gets.

Q. Any funny stories you want to tell us about?

A. Sometimes things go wrong! At one of my first shows when I was less experienced, I was performing a trick with an egg and a bag. I turned the bag inside out to show it was empty and – CLUNK – the egg fell out of a hidden pocket onto the floor. Of course, it was a prop egg so it bounced around as I scrambled after it! I guess you could say I was left with egg on my face…and that’s no yolk!

Q. Do you have any advice for a young person about being a magician?

A. Be entertaining, not a show-off! Some magicians perform in a way that says ‘haha, I fooled you!’ but audiences don’t enjoy being made to feel stupid. I will often act just as surprised as the audience when the magic works, instead of taking the credit for being the clever magician. In fact, some of the best magic happens when an assistant from the audience seems to make the magic work, not you!

If you’re serious about being a magician, I would strongly recommend taking some lessons in drama and acting. Maybe join a local theatre club, or take part in school productions to boost your confidence and performance skills. Learn to play the part of a magician…magic is much more about presentation than the workings of a trick.

Find your own style! With YouTube it can be easy to watch other magicians, learn the secrets then copy their lines (known as ‘patter’) but this might not suit you. Create your own ideas, write your own patter and do the things that are YOU!

And of course…practice, practice, practice! Perform every chance you get, and don’t start charging money for your magic until you are ready. Above all, enjoy it and your enthusiasm will shine through!

Q. Tell us about being a Giggle Doctor? What does that entail?

A. As well as The Magic Hatter, I also work in hospitals for a charity as a Giggle Doctor called Dr. Teapot. I visit children of all ages, and aim to brighten their day and take their minds off the pain and worry of being in hospital. Sometimes I use magic but not always, Giggle Doctors constantly adapt to what each child needs. It could be jokes, slapstick comedy, play, storytelling, puppetry, music, bubbles or even just a chat. But in this environment, magic can work wonders! I can pluck a glowing orb of light from a machine and put it back, make a child’s drawing squeak or tear up and a restore a napkin.

Like all of the creative arts, magic might not be the most stable career…but it’s a lot of fun! If you’re considering magic as a job, have something else in mind too in case it doesn’t work out. Study well at school, and try magic as a hobby first.

Making people happy can be the most rewarding job in the world! As a magician you are

creating that sense of wonder, that moment of magic that some people really need. Just remember that you are the magic, not the tricks or props!

Thanks, Magic Hatter for that awesome interview!

If you would like to learn more about the Magic Hatter or book him for a party, check out these websites; www.magichatter.co.uk and www.facebook.com/magichatter