“Wisdom” Is One Old Bird!

There lives a bird named “Wisdom.” She is a Laysan albatross and is the oldest banded wild bird. She is believed to be at least 68 years-old! The average lifespan for this species is up to 40 years.

Wisdom is not only one old bird, she has laid another egg! 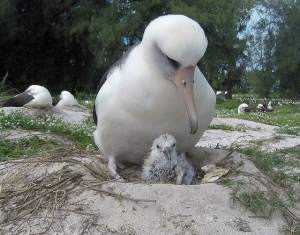 Her and her mate (Akeakamai) have returned to their nesting grounds in Hawaii at the Midway Atoll National Wildlife Refuge where they will raise their newest chick.

Scientists say Wisdom has successfully raised between 31 and 36 chicks in her lifetime.

Another amazing quality about Wisdom is she has been laying an egg every year since 2006 (which is unusual for the Laysan albatross).

What else is cool about the Laysan albatross? Check it out!

What do you think of this awesome bird? Let us know in the comments section.