Today is Memorial Day in the United States. On this day, we pause to remember those who bravely gave their lives to protect and serve, that includes our four-legged friends.

Let’s take a look at some monuments that recognize the heroic efforts of military dogs. 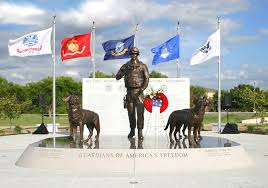 This beautiful monument is located at Joint Base San Antonio (JBSA) Lackland in Texas – home of the Department of Defense Military Working Dog program (the world’s largest training center for military dogs and handlers).

It features a soldier standing with four of the most common breeds of military dogs used since World War II: a Doberman Pinscher, German Shepherd, Labrador Retriever, and Belgian Malinois. The monument reads; “Guardians of America’s Freedom.”

Not Forgotten Fountain in Texas

Joint Base San Antonio, Texas is also home to the ‘Not Forgotten Fountain’ which depicts a soldier sharing water from his canteen with his German Shepherd partner.

This was the first memorial in the United States to honor military dogs. It is located at the entrance to the New Jersey Vietnam Veterans’ Memorial in Holmdel, N.J.. Sculptor, Bruce Lindsay created this bronze statue of a Vietnam War soldier kneeling beside his loyal four-legged partner.

What makes this memorial (and others) all the more heart-warming is most of these canine heroes that served during the Vietnam War never made it home alive.

Sergeant Stubby was the most decorated dog hero in U.S. history and the only one that was ever promoted to sergeant. However, it took over 100 years for a monument to be placed in his honor.

Stubby was rescued on a Yale University field by Robert Conroy who was training to be a soldier. He smuggled Stubby to France with him on a ship where Stubby would begin his life-saving tour of duty.

During 17 battles on the Western Front, Stubby saved countless lives. He alerted troops when he smelled mustard gas or heard artillery shells. He was able to crawl under barbed wire fences to reach injured soldiers and remained beside them until help arrived. He even captured a German spy by the seat of his pants.

But Stubby was much more than a trained canine. He also boosted the moods of his fellow soldiers. That’s why the plaque on his statue reads, Stubby “was a morale booster.” 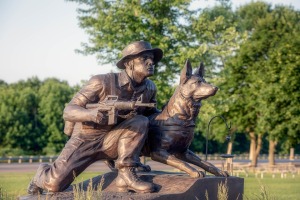 Created by Michael Martino and conceived by a group of Vietnam War veterans, this memorial pays tribute to all the military working dogs and their handlers. This bronze statue is located inside Highground Veterans Memorial Park in Neillsville, Wisc. It shows a soldier crouched beside his German Shepherd partner, with one hand holding a rifle and the other holding the dog’s harness. Plaques display the names of handlers and their dogs.

Happy Memorial Day! Let’s take a moment now to remember all those brave souls (human and furry) that gave their lives for ours.

If you like this post, you may also enjoy ‘My Grandpa is a Soldier,’ a story by Jo Carol Hebert.