America is in danger of becoming extinct in the next few decades?

There are strong actions being taken to preserve two species of the Monarch;

The 2018 Thanksgiving Count of the Western Monarch showed a shocking 86% decrease of the Monarchs that wintered there in 2017. The Eastern species populations are more stable but also declining.

Habitat destruction is the main reason for this vanishing insect. The Monarch lays eggs ONLY on the Milkweed plant. A cute yellow and black caterpillar hatches from the egg and eats the plant, forms a cocoon, and emerges as a miracle of a butterfly. Their breeding fields of milkweed are being destroyed for plant crops like corn and soybean that are providing new sources of fuel.

Also, pesticides are destroying the flowering plants that provide nectar for the adult Monarch.

The Monarchs are major ‘pollinators’, along with bees. As they feed on the sweet nectar 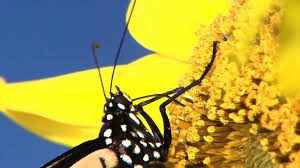 of flowering plants, they fly off with the seeds on their bodies. These tiny seeds of life are dropped and brushed off along their travels and produce new flora.

The Endangered Species Act (ESA) – a petition from powerful conservation agencies – is before the Congress of the United States to place the Monarch under protection. This decision will be made by December, 2020.

What Can We Do?

What can we do in the meantime to help save this beautiful and important creature?

Let’s have a plant a milkweed day! Watch this video on how to grow this essential plant for the Monarchs.

Let’s all work together to save the Monarch Butterfly!