He is receiving Great Britain’s most prestigious animal Award of Merit. The award organization is the charity named PDSA (People’s Dispensary for Sick Animals). 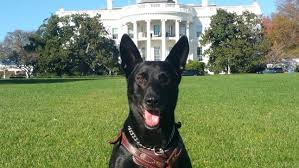 Hurricane to the Rescue

Back in 2014, Hurricane intercepted a ‘fence jumper’ on the North lawn of the White House, home to the President of the United States and his family. Hurricane sprung into action against this threatening stranger.

He sprinted past the guard who had the intruder at gunpoint, leaped on the trespasser, took him down, and pushed him back to the perimeter fence. During this fight, Hurricane was kicked, punched and cut.

Hurricane, now retired from service, and his handler, flew to London on October 4, 2019, to accept the blue-ribboned medal for his heroic actions five years ago.

This honor is equivalent to the OBE (Order of the British Empire) awarded by the Queen to humans.

So, shall we now address him as ‘Sir Hurricane’?

We love dog stories! Send us your story of how your dog is an important member of your family. And look for more ‘hero’ animals on the job in your Smarty Pants Magazine for Kids!