the silence. Rain pelted down and the wind blew hard against the window panes. Eleven year-old Jeremy sat on the sofa waiting for his mother to get home from work.

He switched channels on the TV set. All of a sudden the screen went blank and the room fell into near darkness.

Shadows danced across the floor as the wind blew the trees outside the windows.

There was a sound coming from the back door. A scratching sound. Then a whining noise.

“What was that?” Jeremy asked aloud. “Probably just the wind. I wish Mom was here.”

Jeremy heard the scratching again. Then a whimpering sound.

Something out there wanted in out of the storm.

Jeremy grabbed a flashlight from the utility drawer.

Lightning struck a tree close to the house.

The tree fell, swiping the window on its way down.

The scratching at the back door grew louder as did the whining.

Car lights shone through the big front window. Soon Jeremy heard his mom’s footsteps on the front porch and the door opening.

“The electricity is off,” Jeremy said.

“Not again. I hope this weather lets up soon.” Mom hung up her drippy raincoat. 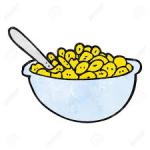 “Let’s go to the kitchen and see what we can fix for dinner, I’m starving.”

“That sounds good to me,” said Mom.

Jeremy took his seat at the table about to dig into his favorite Corny-Bits when the scratching started again.

“What’s that noise?” asked Mom. “It sounds like something scratching on the door.”

“What if it’s a wild animal?” Jeremy asked.

His mother stood up and walked towards the scratching.

“Mom, don’t open that door! There’s no telling what kind of animal it is.”

Mom slowly edged the door open and peeked through the crack.

“Hi, big fella! Where did you come from?” Mom asked. The dog was soaked and dirty with tangled hair on his sides and tail.

The dog pushed through the opening and ran straight to Jeremy. He happily licked his fingers.

“You look hungry, Boy,” said Mom. “There may be some hot dogs in the frig.”

She took out a package of the tasty treats, chopped them up, and put them in a bowl.

The dog gulped down the food, eagerly looking for more.

“Mom can he can stay inside until we find his owners? Jeremy asked.

After the electricity came back on Jeremy and his mother filled the bathtub with warm sudsy water. They hoisted the dog into the tub, then began scrubbing away the dirt. They dried him with a big beach towel, then gave him a clean one to sleep on.

The next morning, Jeremy woke up and the dog was laying at the foot of his bed. He was

chewing on his shoe.

“Give me that shoe, you big old lug,” Jeremy said. He tried taking the shoe from the dog, but he ran out the door and raced down the stairs.

“Come back here!” Jeremy yelled after him.

Mom stopped him at the bottom of the stairs.”Whoa, Boy! We will have to get you some chew toys. No chewing on shoes!”

She handed the shoe to Jeremy. “You better pick up your toys, too, or else he will chew them up,” she said laughing.

The dog grabbed the shoe from Jeremy and took off running again. “Come back here, you big lug!” 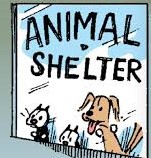 Later that morning, Mom called the local pet shelter to find out if anyone had reported a lost dog. She also posted the dog on social media along with his picture.

“If no one claims Lug, can we keep him, Mom?” Jeremy asked.

“I don’t know, Jeremy. Having a dog is a big responsibility.”

“Let’s wait and see if someone claims him. In the meantime, you know, you will have to

clean up after him, take him for a walk, and feed and water him everyday?

Several days passed and no one claimed the dog.

Jeremy asked his mom, “Do you think someone once loved Lug?’

“I hope so,” she replied. “But they did leave him out in the storm. And no one bothered to look for him. Why did you ask?”

“Because I already love Lug and I could never let him be scared or lost. Plus, I really like it when he comes into my room and lays on my bed at night. It’s almost like he is looking

after me,” Jeremy said.

“He is, just like you are looking after him.” Mom patted the dog on the head.

“Lug needs you as much as you need him. Remember how scared you were the night of the storm, and how frightened he was when we found him at our back door? He must have been terrified out there.”

Jeremy nodded.  “I wouldn’t have wanted to be outside that night. I’m sure Lug didn’t either. I’m so happy he found us.”

Ms. Meeks has been writing since 1988 with have several hundred published credits in hundreds of small press publications nationwide, and several local newspapers.

One of her many passions is writing for children – some of her children’s stories appeared in publications such as Primary Treasure, Word Aflame Publications, and Christian Educator and Adelaide Literary Magazine, to name a few.