The Potter Park Zoo in Lansing, Michigan was pleased to see that this healthy, rare baby, yet to be named, was up and on his little ‘three-toed’ feet in 1-1/2 hours. He was drinking mother’s milk within five hours.

Twelve-year-old Doppsee is responding with affection to her first baby. The zoo allowed the public to vote on a name for the little one.

An actual name, narrowed down to the choices of: Enzi, Azizi, Haali, Bash, Mosi, and Reggie – will be decided by the zoo staff. The little bundle of joy – according to black rhino birth rates in the range of 100 pounds – will grow to be up to 3,000 pounds.

Rhinoceros of the World 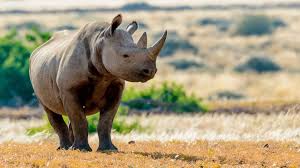 This precious baby is the hope of the future to the surviving 5,000 wild Black rhinos in Africa. Although the species has rebounded from only 2,500 in the years 1960-1995, they are still listed as Critically Endangered (CR).

Here are the other four species of rhinos and their International Union for Conservation of Nature (IUCN) status of survival:

All species of rhinoceros worldwide total only about 29,000 today, down from 500,000 population in the wild at the beginning of the 1900s.

Black Rhinos in Zoos Go Back to the Wild! 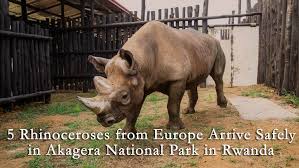 There are over 50 Black rhinos in the Association of Zoos and Aquariums (AZA) conservation programs around the world.

These kinds of cooperative efforts are ensuring that the ‘Christmas baby’ and the Black rhino species will survive and continue to inhabit the face of the earth.

FYI: For Your Information

What Color is the Black Rhino?

The Black and White rhinos of Africa are both gray. They are different, not in color, but in the shape of their lips.

This is due to their feeding habits. Black rhinos are ‘browsers’. Their upper lips are hooked and actually prehensile (able to grasp). They can pluck leaves, flower tips and fruit from trees, shrubs and bushes.

The White rhinos are ‘grazers’. Walking along with their heads to the ground, they chomp short-growing grasses. Good to know, right?

What Can You Do?

Would you like to be a part of Rhino Month (all January)? Here’s what you can do;