“We need you to vote on the Conservation Animal for February.

What is your favorite wild animal that you would like to know about?

Let us know in the comments of this post.

Thanks, and we hope your animal wins the spot for next month!

Rhinos Around the World – The Asian Rhinos

Where Did All the Rhinos Go? 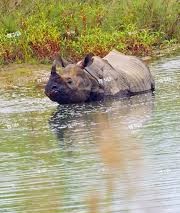 Farmlands, like coconut oil plantations in Asia, are taking over the rain forests and wetlands, the salt licks and mud wallows vital to the survival of these harmless mammals. 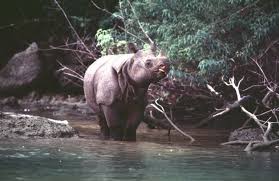 There is literally no place like ‘home’ for the little Javan rhino. The one population for this rare rhino is in the Ujung Kulon National Park.

Their only sanctuary is located at the western tip of Java, Indonesia. Scattered between the Indian and Pacific Oceans, Indonesia is a land formation called an archipelago (group of islands).

Also called the Sunda rhino and the ‘lesser one-horn rhino’, they are cousins of the Indian ‘armored-like’ rhino, but smaller.

Javans have extra problems for survival. They are threatened with diseases transmitted from domestic and wild cattle around the park.

Also, the park is located in the Sunda Arc. This is an area in danger of tsunamis (tidal waves), and eruptions of the nearby active volcano, Krakatoa, which could potentially wipe out the entire Javan rhino population. 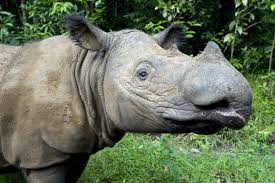 Called the ‘hairy rhino’, Sumatrans are found on the neighboring islands of Sumatra and Borneo in Indonesia.

This species, also called the ‘Asian two-horned rhino’, can weigh up to 1,800 pounds.

These rare rhinos make sounds like ‘eeps’, ‘whales’, and whistle-blows’. Fortunately, help for this endangered mammal comes from programs in zoos, like the Way Kampas National Park in Borneo, the Cincinnati, and Los Angeles zoos in North America. 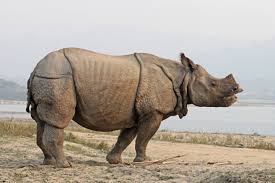 Called the ‘greater one-horned rhino’, these large animals live in grasslands and river forests in Northern India and South Nepal.

Males can grow to nearly 5,000 pounds. They have pinkish color under the thick folds of their skin for cooling. They like to bathe often and are good swimmers, a fortunate trait because they could be prey for tigers.

Indian rhinos are found in successful programs in the Whipsnade Zoo in England, which announced their newest baby rhino on December 8, 2019, by mother, Behan, and dad, Hugo.

This is Baby #15 of Indian rhinos at the zoo.

A Light At the End of the Tunnel

Concerned rhino watchers are cautiously optimistic about the future of global rhinos.

Conservation efforts work to ensure that the rhino will be more than just a picture in a book for future generations.

*Look for the 3rd report for January, The White Rhino of Africa.

Print out the Rhino Chart and the Rhinoceros Word Game!