Meet the Pinnipeds – Our Flipper-Footed Friends!

Seals, sea lions, and walruses are Pinnipeds. Scientists organize the pinnipeds into three

Pinnipeds are found worldwide, on islands or rocky formations off the coasts of cold or cool regions of the earth.

Habitats include the Arctic lands of the North Atlantic and North Pacific oceans, the Southern Ocean lands of Antarctica, and coastal areas of every continent.

Unlike porpoises and dolphins that must stay in the water, these semi-marine mammals have lungs and spend time in water and on land.

On land, their movements appear awkward and comical as they flop, waddle, scoot, or crawl along on their fat bellies or limbed flippers. But, underwater, they perform aquatic ballet – gracefully gliding, swirling, twisting and turning to capture food or just have fun!

Did You Know That Pinnipeds…

…are carnivores (eat fish and squid)?

…can close their noses underwater?

…have some type of fur, except the Walrus?

It’s all about the ears and flippers. True seals have ear holes, but no external ear flaps.

The front flippers are small. They must drag themselves forward on these little limbs.

The back flippers cannot be turned forward for walking, like their cousins, the sea lions. But, torpedo-shaped bodies equip them to be skilled swimmers.

They are able to sustain deep and long-submerged dives to dine on delicacies of fish, squid, and lobsters.

What Kind of Seal Are You?

Check out all these different types of seals. 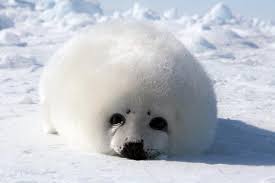 Among others, the Arctic region is home to:

Arctic Seals have to look out for killer whales in the water and Polar bears on land.

This continent, in the Southern Ocean, is home to:

These seals eat regular seal food and unfortunate penguins. Antarctic seals will also eat a family member. In the desolation of the South Pole, they have few enemies, mainly ocean sharks and killer whales.

The Baikal or ‘Nerpa’ of Lake Baikal in Russia is the only true seal that lives in freshwater. Other inland water relatives of the Baikal are the Ringed seal, a favorite of animal and human predators, found in the Caspian Sea.

It’s all about the ears and flippers. Sea lions have external ear flaps. Their front flippers are large and they can bring all four flippers beneath them to adequately waddle-walk across land masses.

Sea lions live in the Southern Atlantic, the Indian Ocean, and in the North and South Pacific Oceans. They come to land, or ‘haul out’ on coasts and islands.

Generally sociable, they gather in large numbers at breeding sites, called ‘rookeries, where males have ‘sea lion wars’ for the best territories.

Sea Lions Around the World

The California Sea Lion is native to the rocky coastlines of Western North America. They float on their backs with flippers sticking up, an activity called ‘jughandling’ that helps regulate their body temperature.

The Northern/Steller Sea Lion of the North Pacific Ocean, ranges with the California sea lion but is lighter in color.

From Brazil to Peru, the red-brown South American Fur Seal ‘hauls out’ onto rocky coasts. The smaller Northern Fur Seal of the Bering Sea rarely comes to land except to breed.

The friendly whiskered Australian Sea Lion, off the South and Southwest coasts and islands of Australia is a land-loving pinniped.

The very sociable Walrus is the only species in its family. They are easily recognized by their gigantic bodies (up to 4 tons!) and long tusks. The tusks are for breaking the ice and hauling out onto rocky islands at the North Pole.

Air sacs under their throats allow them to float in water and breathe. Like the true seals, they have a hole for ears.

Like the sea lions, they can bring the hind flippers forward to move, but evidently find it so much trouble, they often just drag themselves along the packed ice. Both males and females have the familiar tusk teeth that extend downward.

They feed on bottom marine animals, like crustaceans, starfish, and an occasional mammal.

Populations of pinnipeds are generally healthy worldwide. Exceptions are the Monk seals of the Mediterranean area and Hawaii, Galapagos fur seal, and the Australian and New Zealand sea lions. The Walrus is vulnerable.

We hope you have enjoyed meeting the Pinnipeds. Let us know if you have any more questions about these animals.

Check out the Pinnipeds pdf, with a Pinnipeds True/False Quiz and awesome coloring pages.