“I will not!” hollered Prince Ralphie, and he threw his plate of stew to the floor. “I will

Ralphie pushed the sleeves of his purple robe to his elbows, and his purple hat fell to the side.

The queen sighed. The king hung his head. For the last six months, Prince Ralphie refused to eat anything that wasn’t purple. Purple was the most beautiful and majestic color. It was Ralphie’s favorite color.

Prince Ralphie ate grapes. He ate plums. He would even eat eggplant and purple cabbage. But if it wasn’t purple, he wouldn’t touch it.

Prince Ralphie stormed off to his purple room and slammed the door. The sound echoed throughout the castle halls.

The king and queen finished their supper in silence and quietly left the room. The servants rushed forward to clean the stewy mess. The floor was sticky with gravy, and the smell of meat filled the dining hall.

The next day, the king issued a decree offering a reward of fifty thousand gold pieces and

food for an entire year to any man, woman, or child who could solve Prince Ralphie’s purple problem.

All the best chefs, cooks, and culinary geniuses throughout the land brought their prized dishes to set before Prince Ralphie.

Rich smells that steamed from the artfully arranged plates filled the palace walls. The servants’ mouths watered at the sight of all the delicious dishes brought before the prince.

The premier chef from France set his world-renown bouillabaisse in front of Ralphie.

The prized Concinera from Spain made her finest paella for prince Ralphie.

Der Kuchenchef from Germany made pork schnitzel, braised cabbage, and spätzle for

And one by one, the best chefs, cooks, and culinary geniuses were chased out of the castle with their prized dishes flying at their heads.

The king and queen wrung their hands in hopelessness.

In the village, a young boy named Pieter lived with his parents on a small beet farm. They grew rows and rows of vibrant, red beets and sold them in the village. The years had been tough for the villagers and times were hard.

One day at market, Pieter heard two villagers talking about the prince’s troubles.

“It must be purple. It’s his favorite color,” said another.

“I hear the king and queen are quite vexed,” said a third.

When Pieter heard this, he felt horrible for the prince. Who could eat only grapes for months?

Back at home, he set about preparing dinner for his family. As he cut beets for a borscht,

For the next week, Pieter experimented with beet juice. He discovered he could use beets to dye all kinds of food. Cauliflower, carrots, potatoes, even gravy!

He suddenly knew what he could do.

He arrived at the palace just as a snooty Belgian chef was running out the door with his streak frits flying at his fancy chef’s hat and a look of terror on his face.

Pieter could hear Prince Ralphie yelling inside the palace.

Pieter swallowed and tightened the grip on his plate of food.

When he was presented to Prince Ralphie, Pieter bowed deeply and offered his plate.

“Just for you, Your Highness.”

Prince Ralphie sneered and lifted the cover off the plate. When the steam cleared, he squealed. ] 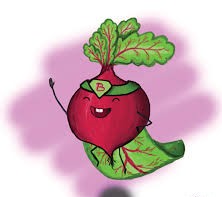 “It’s beautiful, it wonderful!” Prince Ralphie grabbed the dish and began to eat with gusto. “And it tastes better than it looks!”

The king and queen thanked Pieter again and again. They offered him the reward and the food for a year.

“Thank you,” said Pieter, “but could it go to my village instead? It has been a tough year.”

Pieter returned home to his beet farm. He and his family became the official beet suppliers for the palace.

Prince Ralphie ate very well just as long as it was purple, of course.

When Cathryn was eight, she dreamed of becoming a writer and she has been writing poems, stories, and books ever since. She always loved books, stories, and words, and kept finding ways to spend more time in stories. She has a degree in education and currently teaches middle school English and literature. Cathryn lives in Wisconsin with her family where she loves to run and grow a big garden. She also really likes ice cream. Reading is one of her favorite things, and she hopes to inspire that same love of reading in children through her writing.