The Snow Moon – Just Going Through a Phase 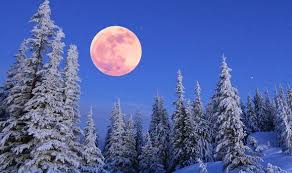 The Full Snow Moon was named for the snow on the ground in February, a month of heavy snowfall.

Some ancient peoples of the Northern Hemisphere called the first February Full Moon, the ‘Hungry Moon’, or the ‘Storm Moon’.

They used the moon to track the times of the seasons. They named the months according to the phases of the moon.

The Wishram Native Americans of the Pacific Northwest called the first full moon of February the ‘shoulder to shoulder around the fire moon’.

There was so little food in February that the people gnawed on bones and made bone marrow soup.

Fun Fact: Alan Shepard was the first man to hit a golf ball on the Moon in February, 1971.

So Close Yet So Far Away!

The February Full Snow Moon rises in the East on Saturday, February 8th and reaches its

highest point at Midnight and early morning on Sunday, February, 9th. This makes the Snow Moon also a ‘supermoon’.

A supermoon is when earth’s moon is closest to the earth during the year.

Who Can See the Snow Moon?

Everyone, everywhere on Earth can see the Snow Moon.

As the Moon orbits the Earth, the half of the Moon that faces the Sun will be lit up. The different shapes of the lighted portions can be seen from all parts of the earth. These changing shapes are known as the phases of the moon. Each phase repeats itself about every 30 days (one month). These phases will be: a full lit moon, or crescent portions, or a half moon.

Cool, huh? So, bundle up and go out with your family for a Moon “Space Watch”! Don’t worry if you miss this one. The phases repeat each month.

Check out the Moon regularly. Make a Moon Journal. Draw a circle and color the light and dark shapes you see each night.

You will find that there is a same pattern of phases each month.

See ya’ next time, Space Watch Kids. Keep looking up. You never know what you will see up there.

See Smarty Pants Planets and Space Watch features for more fun stuff about those mysterious ‘galaxies in a place far, far away’!