The geese were excited. (All but one, that is.)

The longer days, the melting ice and the budding trees signaled the time to head north.

He wanted to see his hatching place, but everyone knew he couldn’t stay in formation. 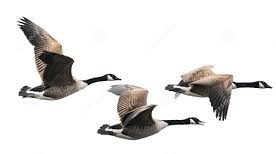 Suddenly, his gaggle began honking and getting into position to fly to another lake. Gabe joined in and they all took off, forming a V in the sky.

He looked to the front. He was perfectly lined up.

He looked to the side. He was exactly in line with the other row of geese.

He was doing it – he was flying in formation!

Gabe looked up at the puffy clouds. One looked just like a goose, floating along. Gabe drifted closer and slowed down. When the cloud began to change shape, he realized his

formation was nowhere to be seen. He caught up with them as they were landing.

The next day, as the sun crept over the horizon, the geese began to honk. This was the big one! When everyone was ready, they climbed into the pink sky. The leader showed the way and two lines formed the V that would help them endure the long flight.

The sun rose higher and brighter, and patches of ice on lakes below glittered as though flashing secret messages.

And all was well. Gabe was flying in formation on a beautiful day.

Gabe went into a nosedive. He spotted a goose on a chunk of ice and landed next to him.

“I’m Bert and I’m stuck in a crack of the ice! I’m in trouble because my flock is long gone.”

He tried pecking at the ice around Bert’s foot, but his bill was too dull.

Bert sighed, “It didn’t work for me either.”

Hearing “Rat-a-tat-tat” in a nearby tree, Gabe flew to a spot right under the tree and looked up.

A woodpecker was pecking a hole.

The woodpecker stopped pecking. “Now why would I do that?”

“My friend Bert is stuck. He needs help.”

“I’m really busy, making a hole for my nest.”

“It wouldn’t take long to chip away the ice around his foot. Please!”

They flew to Bert’s side and the woodpecker began chipping away ice, being careful not 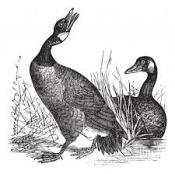 to peck Bert’s foot. In a short time, Bert was free and the woodpecker returned to his nesting tree.

“Now what?” asked Bert. “I notice you are all alone too.”

On their flight they encountered flocks and flocks, but not the ones they searched for.

They pushed on. After a time, they saw a gaggle gathered around a lake below.

They flew lower and Gabe said, “I recognize them! Come on, Bert. You can meet my family.”

Gabe was thrilled to be returned to his group. They welcomed him back and marveled at Bert and Gabe’s adventure.

“You can travel with us until you find your group.” said Gabe.

At last, Gabe’s gaggle reached their nesting grounds by a wide river. They nibbled the greening grass and noticed it was just as they remembered it.

Bert tried not to look sad, but he missed his own family and wondered what to do. Then he noticed a group of geese across the river. Could it be?

“Hey Gabe, come help me check this out.”

He and Gabe flew over and found Bert’s parents and many friends. “We have missed you

and worried about you!” they said.

“I missed you too!” said Bert, “but I want you to meet my new friend Gabe, who saved my life. He’s quite a navigator.”

Jan Cornebise is a writer of stories and poems for children. She has degrees in elementary education and is a member of the Society of Children’s Book Writers and Illustrators. A former teacher, she loves family time, reading, gardening, and travel.