Horses, oxen, and dogs have always been getting the credit for helping humans. However, there are some new animal-heros on the scene and what they can do may amaze you.

Check out these unusual animal helpers!

Rats have a reputation for being gross and yucky, but they may soon be getting a positive rating. The African Pouched Rat is being used by some African nonprofit organizations to sniff out bombs in former war zones.

These radical-rodents can grow up to 3 feet long (1 meter) and have poor eyesight, yet its nose is superior. In fact, like dogs, (that are also used to detect explosives in airports), these rats are highly intelligent and trainable. This has inspired the US to start the HeroRat program that would train and use rats to defuse bombs worldwide.

Who knew a creature that spends most of its time in the garbage could be so useful?

Donkeys have always helped humans with farming and carrying heavy loads, but did you know they can also be ferocious watchdogs…err...donkeys?

The donkey has a natural dislike for dogs, wolves, and coyotes, so it makes the perfect guard for a flock of sheep. It has been used in the pastures for many decades. However, the donkey can also be trained to guard a house and its property.

Donkeys are very territorial and very wary of strangers. They also have keen hearing and excellent eyesight, so they will be alerted to predators long before they start to sneak around the yard.

Once the watch donkey catches sight of a stranger and feels threatened it will use a four-part full-on assault of braying, kicking, stomping, and chasing the intruder.

You better run when this beast is snarling and lunging from behind you!

It feels good when someone rubs your shoulders, but what about letting snakes slither over those sore muscles?  You may be thinking, ewww, but snakes are actually helping many people relax and unwind. 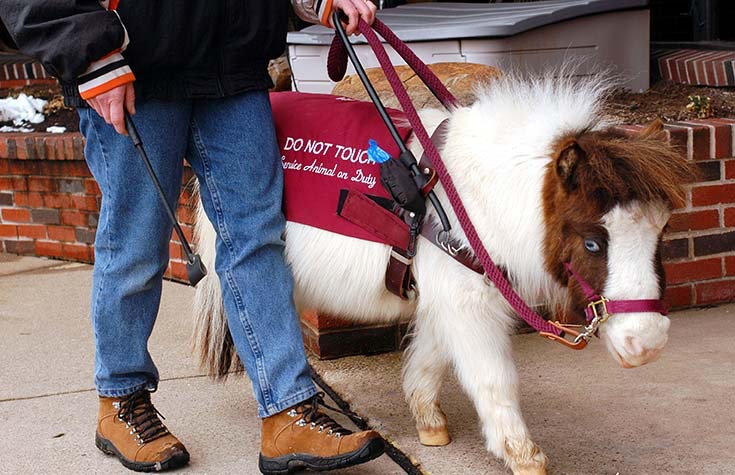 We’ve all heard about dogs helping the blind, but what about a tiny horse? Miniature horses only grow to be about the size of a large dog, but they’re more than capable of lending a helping hoof.

Mini horses make the perfect companion as they’re calm, have great vision and an excellent memory. Plus, horses naturally live upwards of 25 years, are not prone to fleas and are very focused – it’s difficult to distract a horse when it has a job to do. Also, mini horses are considered hypoallergenic, so they’re great for people with allergies.

Even though these animals may be “unusual helpers” their abilities are amazing. Maybe we should train other animals to lend us a paw. Perhaps a hamster housekeeper or a kitty cab driver?