Check out these fun facts about Mars! 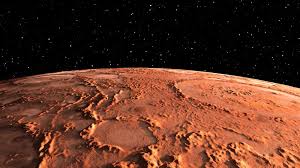 Weather conditions and a thin atmosphere of clouds prevail; also, a reddish soil (due to the iron elements in it) is often swirled into monster dust storms.

Evidence of liquid salt water in the ground has been found.

How Do We Know About Mars?

Man has left his footprints on the surface of the Earth’s moon, but no man has walked on Mars. Instead, man-made robots have landed and “roved” over the bleak environs of this planet neighbor.

These ‘robotic geologists’ have ‘tech toolboxes’ of instruments that take pictures, measure, record, and transmit information back to earth in the lifetime of their existence.

From the data received and evaluated, NASA (National Aeronautic and Space Administration) scientists are solving the mysteries of the ‘Red Planet’.

Each Rover spacecraft was named by students in nationwide contests for grades K-12th.

1. ‘Little’ Sojourner. First wheeled robot on Mars was part of the Pathfinder Mission.

Landed January, 2004. Each weighed 374 pounds, traveled at 0.1 MPH and had 5 science instruments on board. Exceeding their 90-day life expectancy, Spirit got stuck in a sand trap in March, 2010 and ceased transmitting. The spunky, golf-cart-sized rover, Opportunity, was destroyed by a dust storm in June 2018. The mission of proving the presence of long-time standing water on Mars was accomplished.

Landed August, 2012. Weighs 1,982 pounds and travels at 0.09 MPH. Carries 10 scientific tools. Size of a small SUV to prevent getting stuck or rolling over. As of May 13, 2020, Curiosity is still in operation on Mars and transmitting information. 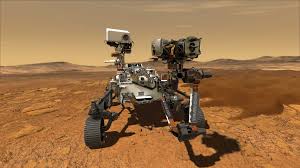 signs of ancient life on Mars and collect rock and soil samples.

“Percy” is packed and loaded to go. Weighs 2,260 pounds and can travel 0.09 MPH. Twenty-three science instruments in the toolbox will relay information to determine if sustainable life is possible on Mars.

Thanks to the skills and dedication of scientists and public support, these awe-inspiring successes of man’s quest in space are being achieved. The symbolic names are also, to us ‘earthlings’, an inspiration to ‘persevere’ in our own goals.

Keep your eyes to the skies. You never know what you will see. Look for further Space Watch Updates.