You smell the fresh green grass while a light breeze blows your cares away. You draw your club, and with a small clink, you send the dimpled ball rolling towards the hole.

This is all part of the game of golf.

Are you up to par?

The History of Golf

Golf has been around for centuries. Back in the Roman times, when Julius Caesar ruled, the game of golf was played by striking a feather-stuffed, leather ball with a tree branch shaped like a club.

The game of golf can also be traced back to Song Dynasty in China during the years 960 to 1279. There are even paintings depicting people playing (what looks like) a golf game.

However, most folks believe the sport of “real” golf really began in 1456 A.D. in Edinburgh, Scotland.

People here took this sport so seriously, that In 1457 it was banned throughout this region by the nation’s Parliament. The officials believed it interfered with their residents’ military training.

Today, the game of golf has only grown in popularity.

Are You Up to Par? Golf was one of two sports played on the moon. The other was the javelin throw.

What You Need to Golf 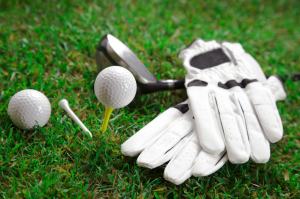 Golf doesn’t require a lot of equipment or clothing, but you will need these items;

A standard set of golf clubs contains irons, woods, and putters. Each of these clubs is for specific shots.

For example, you would not use a club (which is for long distance shots) to sink a close shot into the hole. Here you would need a putter.

Are You Up to Par? The golf course and its holes are set out into three sections; the putting green, a flat starting point, and the fairway.

Golf is played on a well-groomed golf green. This grassy area contains 18 holes, each with its own level of difficulty.

Each hole has a designated number of shots or par, that is to be obtained. When a player makes a shot it is called a stroke. The less of these you use during the game to sink the ball the better.

Of course, everyone wants a hole-in-one. This is a perfect shot the golfer gets when he only uses one stroke to sink the ball.

Are You Up to Par? There’s a lot of walking in golf. In fact, if you choose to play 18 holes (and not use a golf cart), you will walk about four miles.

What do you think about this sport? Could you be a great golfer one day? Even if you never become a pro, this game is worth “the shot.”