Today is World Oceans Day. In honor of this “splashy” occasion, let’s take a tour around the oceans of our planet – you may not be able to quench your thirst in them, but they are still fascinating.

Seventy percent of the earth is made up of water. In other words, if we were to take a cube and fill it with the ocean’s water, it would be 621 square miles.

The largest ocean is the Pacific. It covers around 30 percent of the earth’s surface. The second largest is the Atlantic at 21 percent, and the third is the Indian ocean at 14 percent.

The oceans vary in temperature and are all connected due to the ocean’s currents. These currents circulate the water throughout the world.

It’s no surprise that 50 to 80 percent of all life on the planet can be found in the ocean. However, scientists have only explored about 5 percent of what lies within these bodies of water.

The oceans are a means of transportation for many large companies. Ships travel these waterways to import and export goods.

The ocean is called home by hundreds of thousands of species. 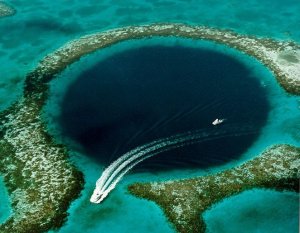 The Mariana Trench is located east of the Mariana Islands in the western Pacific Ocean. This massive “hole” is the deepest spot measuring in at 36,000 feet. Imagine what is lurking in the depths of this trench.

The average depth of the ocean is around 12,400 feet. If we were able to swim to the bottom of the sea, we would experience tremendous pressure. In fact, it would be like trying to support 50 jumbo jets.

Along with a massive trench, the ocean is also home to the longest mountain range. These mountains can be found running through the Atlantic ocean. It then wanders into the Indian and Pacific oceans.

These mountains comprise 23 percent of earth’s total surface by measuring in at upwards of 35,000 miles – it has higher peaks than the Alps.

The ocean doesn’t only have mountains and trenches it is also home to volcanoes. It is estimated that around 5,000 active underwater volcanoes are present in the world today. These can stand alone or form ridges with other volcanic rock.

The tallest peaks of these volcanoes will rise above the water and eventually form an island. In fact, the longest volcanic ridge is 15,000 miles long.  Where is it? The Hawaiian Islands, of course.

The ocean is not only teeming with life and force; it’s a fascinating world to visit. Let’s celebrate our oceans (not just today) bur every day by being kind to them. Let’s recycle and reuse what we can and say “no” to plastics.

Together, we can make our ocean waters clean again.