The squeaking of shoes on the court and the feel of the ball bouncing under your hand. You dodge the defense and jump as high as you can, launching the ball into the air. It spins and seems to hover for a second over the net…

This is all part of the game of basketball.

The History of Basketball

The first basketball game was played in 1892 in Springfield MA. The rules were simpler than today, and the hoop was made from a peach basket.

Each time a shot was made someone had to climb a ladder to take the ball out. Soon the idea of cutting a hole in the bottom of the basket was brought up.

This was the beginning of the hoop.

Pass This Along Fact – In the early 1900’s, basketball players played the sport in cages made out of chicken wire and mesh. This kept them from falling into the spectator’s seats.

What You Need to Play Basketball 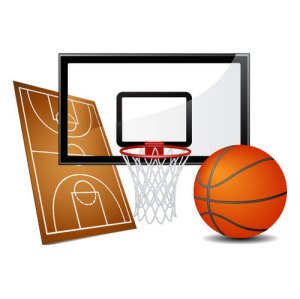 To play this sport, it helps to have these items;

Pass This Along Fact – Early basketball games (1891 -1950’s) used a soccer ball. Players would often rub coal dust on their hands for a better grip. 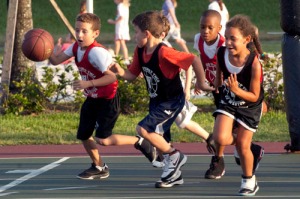 Today, the sport of basketball is usually played indoors on a special court, with baskets high up on both ends. The team consists of 5 players; 1 center, 2 forwards, and 2 guards. Each of these players has a specific role to play in the game.

Basketball does require skill. You have to be able to follow plays laid out by the coach, run, jump, and take up defensive positions to stop the opposing team from getting the ball.

When the ball goes into the basket, a score of 2 points is achieved. The game is broken up into 4 quarters of around 12 minutes each. During this time, the play is fast and back and forth between the two ends of the rectangular court.

Pass This Along – A warm basketball is bouncier than a cold one. This is because the molecules in the warm ball hit its inside surface at a higher speed.

What do you think of the game of basketball? Tell us if you’ve ever played on a basketball team or just for fun!