. . . ten thousand-li-long wall, the Chinese phrase for the Great Wall. This translates to “a

measurement that is endless.”

The Wall is the longest structure ever made by man. This spectacular structure has been 2,500 years in the making. Measuring all portions, pieces, parts, sections, and branches, researchers claim that the Wall extended 13,000 miles.

This Wall is a World-Wonder!

In 1987, The United Nations Educational Scientific and Cultural Organization (UNESCO) designated the Great Wall of China as an ‘historical heritage of mankind’. It is currently listed as one of the seven structural wonders of the world.

Why Do We Build Walls?

In ancient times, early tribal families of wandering people (nomads) began to settle down in groups, build shelters, and cultivate the land. These settlements gave them a sense of community. Building walls around their living areas gave them a feeling of identity and security.

Walls were built of local materials, like, packed earth and stones.

Ancient China was not a unified country. Over the course of many centuries of militant 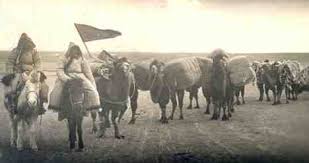 history, dozens of dynasties/states of China rose and fell. The leaders of these settled peoples each built defensive walls.

During their times of power, they strengthened, added on, repaired, and extended sections of their walls.

But another threat loomed beyond the walls of neighbors. Tribes of unsettled nomads on the northern border constantly bombarded the walled cities, seeking to plunder and pillage their carefully cultivated lands.

The Country of China Built Walls 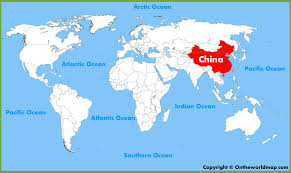 China, on the continent of Asia, developed a civilization that built their walled cities about 1,000 years after the Egyptians built the Great Pyramids. China is protected by natural boundaries. Forested mountain ranges, and desolate deserts make up almost 1/2 of their lands. The Pacific Ocean sweeps the East side of the country. But the Northern border was open to attack from the Mongols, a warrior tribe of horsemen that inhabited the grasslands.

The First Emperor of China Built an Empire (and THE Great Wall)!

In these early times, there was an era called the Warring States, when tribes were

fighting to be the supreme ruler of the region. A family that became the Qin Dynasty was victorious and united the conglomeration of states into one Empire.

With the forced labor of the common man, the Emperor linked the many previous sections of separate walls into one great wall. He created a central government.

The Great Wall became a symbol of his strength and power.

The Wall as a Highway for Trade

Eventually, the Qin Dynasty fell to another more powerful dynasty. In the course of subsequent centuries of constant warfare and wall-building, the inventive Chinese used their own inventions of warfare. They had gunpowder and the lethal crossbow. Centuries before, they had invented paper and the processing of making silk material.

The Wall provided passage for trade routes. Silk was in much demand from surrounding areas and China traded for gold, ivory, and other foreign merchandise.

Their Chinese invention of the ‘wheelbarrow’, originally for transporting military supplies, greatly aided in the construction of the Wall.

And, best of all, the Chinese had invented ‘fireworks’ in an earlier century. From the gunpowder, they developed ‘rockets’, which they fired against the northern invaders.

The Fall of the Wall

In spite of all the efforts of all the Emperors to maintain the Wall, the persistent Mongols finally breached the barrier. China was ruled by foreigners.

The Ming Dynasty Restores the Wall

Finally, a strong family called the Ming Dynasty conquered the Mongols and drove them out of China.

They constructed with bricks, stamped with emblems of dragons. Watchtowers were built at intervals along the wall. Thousands of armed soldiers, relaid messages by fire or smoke to warn of attacks.

The Ming Dynasty constructed or linked over 5,000 miles of what is now the most preserved portion of the long network of piecemeal walls.

The End of Building the Great Wall

But eventually, even the strong Ming dynasty weakened. Again, northern invaders broke through the wall. In time, they became a part of the population of the Chinese people. China no longer needed a wall of defense and the building of the Great Wall ceased.

Conservation of the Great Wall of China

Most of the wall has disappeared or collapsed, due to vandalism: people pilfering pieces for artifacts and stones for houses. The natural building materials of the wall are eroding away from wind and rain.

Today, millions of tourists each year visit portions of the Ming Wall to walk on a piece of history. Tourists are inspired by the breathtaking scenery and the historical significance of the Great Wall of China.

Most of all, they are amazed at the impossible structures that people can build.

Watch your Structures section for more amazing engineering/architectural marvels of the world!

Go with Reese, Wonder Boy, as he discovers unusual sites. Where in the world would you like to go with Reese? Tell us in the comments section!

Do you want to learn about the oldest clam named Ming? Click here.