Could the Pigeon Be Man’s Best Friend?

Sorry, Fido, but this information shows that the lowly pigeon is more than just a bird that poops on old statues in the town square.

Dogs have their many well-deserved wartime medals, but did you know that there were

‘pigeons of war’? One was named Cher Ami and was awarded the Croix de Guerre, an honor also awarded to the American General, George S. Patton.

Another ‘bird of war’, named William of Orange, was honored for flying 250 miles with a message that saved the lives of 2,000 soldiers.

In all, 32 pigeons have received the coveted Dickin Medal for service, equivalent to the Victoria Cross for people.

There are hundreds of species of pigeons. Homing, Courier, or Carrier Pigeons were used widely in both World Wars I and II.

Foot soldiers would wrap a pigeon in a cloth vest and clip on their uniform like a piece of equipment. When necessary, they attached a canister with a message on the bird’s foot or back and let them loose.

Pigeons are easy to train and reliable to return to their training roost where they know to find food and shelter. Communications officers monitoring the roosts would receive the messages. From the remotest locations, pigeons can detect the earth’s magnetic fields to return home. 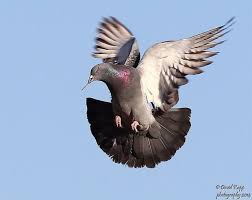 Pigeons can launch themselves out from a standstill and reach a flight of 60 miles an hour in just two seconds! They move their wings ten times per second and can fly at altitudes of up to 6,000 feet.

In long flights of 16 straight hours, their heart beats 600 times per minute. One pigeon’s flight time was recorded at 92 miles per hour.

Are You As Smart As a Pigeon?

Pigeons can recognize themselves in a mirror; recognize all 26 letters of the alphabet; and detect earthquakes, storms and volcanic eruptions from long distances away. These birds can also identify objects 26 miles away.

So, you get a pet pigeon. You name him ‘Parker’.

You train him to go to your friends

house to get food. You wrap your very private note around his little leg. Off he goes! Instead of phoning, texting, or ‘snail mail’, you got ‘pigeon mail’!

What do you think about that, Smarty Pants?