The white-throated sparrow is releasing a new version of its traditional song and it has topped the musical charts of the bird world.

The old song with a ‘chirpy’ introduction and a pattern of three-syllable ending notes, has lost one of its terminal notes.

However, the bird has kept the familiar ‘intro’ and tweaked the ending to a 2-syllable pattern.

People Who Listen to Bird Songs

Birds rarely change their songs, so, in the sparrow community, this is the equivalent of Mozart playing ‘rock ‘n roll’.

The new song has caught on and male white-throated sparrows are echoing the melody across Canada at an amazing speed.

Scientists at the University of British Columbia, with the invaluable help of citizen bird

lovers, have collected and analyzed field audio samples of over 1,700 male white-throated sparrows and 18,000 recordings. They have developed an online database called eBird that allows them to track and record the consistency and progression of the bird’s song.

Studies have proved that the old triplet dialect began changing in the year 2000 after decades of the common and familiar repetition. The birds in Alberta and populations in Ontario are taking up the chorus of the new song and spreading it eastward.

Every Generation Has Its Own Music

Researchers say it is likely that the song adaptation originated from a bird west of the Rocky Mountains.

Studies of the song change suggest that it likely was transmitted by sparrows in their overwintering grounds, where juveniles mingle with sparrows from different parts of the country.

The song has to be learned by imitation from another. Birds returned to their territories, singing the song to mark their territory and to attract mates. The curious females seem to like the different twist to the song, as long as it retains the predictable introduction.

The Mystery of the Missing Note 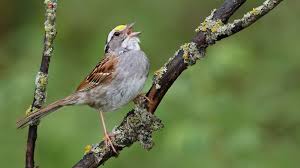 Our wild life neighbors fascinate us with the mysteries of their behaviors. These natural and instinctive creatures are always a little beyond our understanding as they (like us) improvise and innovate ways of survival in an ever-changing world.

We can observe and study and speculate and apply scientific facts and notions that explain the phenomena of birds. Mostly, we can just watch and marvel.

But, unless we can be a bird for a day, fly freely across treetops, build nests, evade predators and sing their incredibly lovely and miraculous songs, who can really know why some white-throated sparrows composed a new song that dropped a note from the tune their ancestors had sung for fifty years?

What do you think of the White-throated Sparrow’s new song? Tell us in the comments section.