Saint Nicholas Was a Real-Life Gift-Giver!

Did you know there was a real boy named Nicholas?

It is the third century (year 280 AD) during the time of the Roman Empire. A son is born to wealthy parents in the country of Greece in Europe. They named him Nicholas. When Nicholas was a teenager, his parents died. He went to live with his religious uncle in Asia Minor in the area which is now the country of Turkey. The young man was a cheerful, gentle and generous person. He used his financial inheritance to help poor, sick, and needy people.

In time, Nicholas, the boy became Saint Nicholas, the Priest. He was called a ‘gift-giver’ and a ‘wonder-worker.’ He died on December 6th in the year 343 AD. Stories of his many acts of kindness spread throughout the region and to other parts of the world. 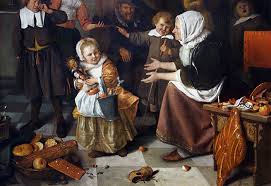 The Feast of Saint Nicholas

In the 1500s, the country of Holland was known for celebrating the life of Saint Nicholas on December 6th. Children would put their shoes out the evening of December 5th. In the morning, their shoes would be filled with gifts.

When Dutch immigrants came to America in the 1700s, they brought this celebration tradition of ‘Sinter Klass.’

Eventually, the tradition became a part of the colonial culture of Christmas on December 25th. In 1820, the poem, A Visit of Saint Nicholas, by Clement Clarke Moore, described a jolly, heavy man who comes down the chimney to leave presents for children and rides in a sleigh pulled by flying reindeer.

Eventually, Sinter Klass became the name, Santa Claus. Later, in 1881, a painter named Thomas Nast (said to be the ‘father of the cartoon’) added to the story with illustrations showing Santa Claus wearing a red suit with white fur trim.

Do You Know Santa Claus Around the World?

Many cultures around the world have different names for Santa Claus.

Saint Nicolas was a real person with a heart for giving. What would you like to give to your friends and family this holiday season? Tell us in the comments section.