Listen to and read-along with this sweet story by, Rosemary Gemmell 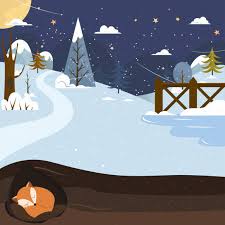 Winter had arrived in Heatherlee Woods in the north of Scotland. Fern the fox cub lived in a cosy den near the nature trail, with her mother, father, sisters and brothers.

One morning Fern popped her head out of the den and stared at the strange sight. The grass and heather had all disappeared.

Fern fetched her brothers and sisters to have a look. Five little heads peered around. Where had the grass gone? Brave Fern jumped out of the den and stopped. Her paws felt very cold. She looked down.

Not quite so brave now, Fern lifted her front paw carefully. It was wet, and white. She put

her paw back down and pushed her nose into the ground. Wet and cold and soft. Fern sniffed curiously, it smelled wet too. Suddenly she sneezed, and the white softness blew about her. Then she discovered something.

The grass was underneath.

Fern and the other cubs found out how much fun the white could be. They scampered and fell and rolled until they were tired. Then their tummies rumbled with hunger and they returned to the den for food.

Later that day, Mummy fox warned the cubs she had seen humans walking on the nature trail. Fern knew the foxes stayed away from the path when humans were about. But today, she was excited by her new discovery and couldn’t wait to go outside again. When mummy and daddy fox were busy with the other cubs, Fern sneaked out of the den.

Soon, she was playing with the strange wet fluffiness and having so much fun rolling in it that she forgot she was too near the path. Then she heard voices. She hid behind a high rock covered in white. She watched and listened.

Fern saw two small humans. They wore woollen hats and their hands were covered with bright coloured mittens. Their feet had disappeared inside black shiny boots.

Fern saw her pick up some of the white stuff and throw it at the boy.

Snow, that’s what it’s called! Fern watched as the children rolled up some snow and threw it to each other. But it broke up as soon as they tried to catch it. They were laughing and falling down and rolling in the snow, the way Fern played with her brothers and sisters.

They looked like nice humans, Fern decided. She took a step towards the boy and girl. Maybe she could play with them too as they didn’t look very big.

Then she heard a voice shouting. “Children, don’t go too far, wait for us.”

Fern jumped back out of sight behind the rock as two big humans came along the path. Sadly, she watched the children stomp on through the snow away from her.

Fern always wanted to know everything, so she scampered through the snow-covered woods to see where the children had gone. Then she heard their voices again. She stopped and hid behind a tree.

“Look at the ice on that stream. Let’s slide on it, Peter.”

“No, we’d better not, Amy. Mum said it was dangerous.”

Then the man called to them. “Amy, Peter, come up here at once, we’re going now.” 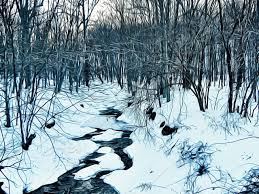 Fern watched the children run to their mummy and daddy. Her mum might be looking for her too. But she wanted to look at the ice first.

Fern stepped onto the frozen stream. Suddenly her paws slid in every direction. Then she fell flat on the ice. She couldn’t stand up. Suddenly, the ice began to move.

Her heart was beating like mad with fear and Fern tried to stand. She fell again.

Pulling herself up onto her small paws, she managed to half slide her way towards the side of the icy stream. But she couldn’t go any further without collapsing down on her tummy again.

Next minute, she heard a sound she recognised. Her mum – she’d found her!

The russet colored vixen quickly grabbed hold of Fern by the back of the neck and lifted her to safety. Fern clambered onto the snowy grass, panting.

Mummy fox was not pleased. Fern promised she would never do anything so foolish again.

The boy, Peter, was right, the ice was dangerous. Fern ran all the way home beside her mum, glad to be safe and warm again.

Rosemary Gemmell is a Scottish writer of short stories, children’s fiction, articles, poetry and novels. She is a member of the Society of Authors, Romantic Novelists’ Association and Scottish Association of Writers. Scotland greatly inspires some of her stories and she loves to dance! Check out Rosemary’s blog and her website!

Check out The Tin-Can-Man by Rosemary Gemmell. It’s super-cool!