What’s unusual about this city of 4,300 people at the North Pole called Utqiagvik (besides the name)?

Well, for one thing, Utqiagvik is the northernmost city in the U.S. And, the other thing is that the people of Utqiagvik live in constant darkness for 65 days in winter.

From mid-November through mid-January, this community is plunged into the polar night that invades all inhabitants above the Arctic Circle, which encircles the frigid, Arctic polar regions.

The sun doesn’t rise, although it does hover 6 degrees below the horizon and permits a very dim glow (called ‘civil twilight’) for 3-6 hours of the day. Street lights brighten the city and life goes on.

Utqiagvik, “Where the Snow Owl is Hunted”

council, by a majority of only six votes, reinstated the original name. This reflected the 63% of the population of descendants of native Inupiat people that settled the coastal region of the Chukchi Sea in the Arctic Ocean.

A deep desire to preserve the traditional culture of the past prevailed over the image of a modern name.

As though to make up for its absence in the winter, the sun is above the horizon and does 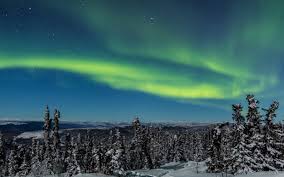 not set in Utqiagvik from early May to the end of July, about 80 days. Although the winter brings the Aurora Borealis – the shape-shifting shimmering of the Northern Lights – summer has its offerings in Utqiagvik.

This is a good time to visit the archaeological findings of prehistoric sites of Alaska and Canada. Alaska Airlines has daily flights from Fairbanks and Anchorage AK (Alaska), with maybe a flight change in Deadhorse, AK.

Surely worth the trip to be on ‘the top of the world’. Wouldn’t you say?