Who Is the World’s Oldest Living Land Animal?

Which of these three animals do you think is the oldest animal alive on land today?

Congratulations to Jonathan, the tortoise! The average lifespan for a giant tortoise is 150 years. But, this rare Seychelles Giant Tortoise celebrated 189 years of life in February (2021).

We’re happy, too, for little Rubble, the oldest domestic cat. Rubble, an orange/white Maine Coon had his 31st birthday in June, 2019. The average age for domestic cats is 12-18 years. Rubble is doing fine, except his owner says, “he’s a little grumpy.” (Update: Rubble passed away before turning 32).

What about Fatou, the oldest living gorilla? She enjoyed a rice and raisins birthday cake on her 61st birthday in April, 2019. The normal lifespan of the gorilla is 30-40 years. (Update: Fatou is still alive and has celebrated her 63rd Birthday).

Where is Jonathan and What is He Doing?

Jonathan is happy and living a luxurious lifestyle on one of the most remote islands in the world. He strolls through the gardens of the governor’s mansion, covering ground at 1/2-mile per hour. Dinner is cucumbers, bananas, carrots, and apples. He likes to play with his tortoise friends – Emma, Fred, and David.

Jonathan’s caretakers say that he is a gentle and friendly fellow. But, sometimes, he ‘nips’ them when they feed him. His beak is made of keratin, like a fingernail, and is very sharp!

Fun Facts About Jonathan – Did You Know? 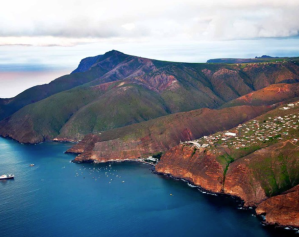 Jonathan was a gift to the governor of the island of St. Helena in 1882. At that time, scientists determined that he had been hatched in the Seychelles islands in 1832 and was officially 50 years old.

St. Helena is located in the middle of the South Atlantic Ocean between the west coast of Africa and East coast of South America.

The Atlantic Ocean is the second largest ocean in the world after the Pacific Ocean. It touches the continents of North and South America, Europe, and Africa.

Jonathan was brought from the Seychelles chain of islands, off the east coast of Africa, in the Indian Ocean.

The Indian Ocean is the third largest ocean in the world. It touches the continents of Africa, Asia, Australia, and Antarctica.

The giant turtle of the Seychelles is on the brink of extinction. This makes Jonathan not

only the oldest living land animal, but one of the last of his species.

His cousin companions on St. Helena are of the Aldabra giant tortoise species from the Seychelles. With a population of 100,000, the survival status of these tortoises is listed as vulnerable.

When is a Tortoise NOT a Turtle?

Chelonions are egg-laying reptiles that are either turtles or tortoises. They have a protective bony shell called a carapace.

A turtle lives in the water most of the time and comes out on land to nest.

A tortoise lives on land and goes to water to drink.

Here’s a Way to Remember ‘Turt’ and ‘Tort’

Turt and Tort were two Chelonians.

Turt was a Turtle. Tort was a Tortoise.

but they were friends in spite of all of it!

Do you want to learn more about turtles? Click here.

Animals are on and under the ground (terrestrial); in the water (aquatic/marine); and in the air (aerial). There are other animals, in the ocean, much older than our terrestrial hero, Jonathan.

Scientists found an Ocean quahog clam on a seabed near the country of Iceland thirteen years ago. They called it ‘Ming’, and it was over 500 years old! (But that’s another story . . . ) 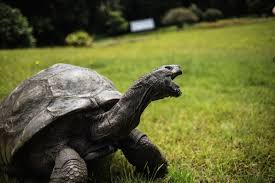 So, Jonathan continues to bask in the limelight of being a tortoise celebrity. He sunbathes on the manicured lawns of his tropical island paradise and nibbles on his favorite food, lettuce hearts.

Although mostly blind, Jonathan, with good health and excellent hearing, is enjoying his ‘golden years’.

How old is your pet?