A clam is a bivalve mollusks, like oysters. In regular people talk, that simply means that a clam has two shells and a soft animal-edible inside. The word, mollusks, came from a word that means ‘soft thing.’

The life work of a mollusk is to build a hard shell to protect its delicate, slimy body. These amazing creatures use salt and chemicals from sea water to form their beautiful fan-like shells. The shells are joined to muscles that open and shut the shell.

The Clam is an Animal! 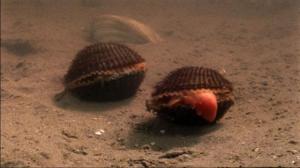 It has a heart.

It has a foot muscle that extends beyond the shell for burrowing into the sand.

It has a mouth at the front end of the shell to take in food particles, called plankton (tiny organisms that float in the water).

It has a stomach that stores and digests the food.

It can reproduce and make baby clams.

And, yes, it can even poop!

Clams are found all over the world in all different types of habitats, including saltwater and freshwater.

The commercial industry of edible clams is thriving along the shallow North American and Canadian coastlines. But, most of the 12,000 different species of clams are found in the ocean.

And this brings us to the most amazing clam of all: a Quahog clam dredged up from the

North Atlantic Ocean, off the coast of the country of Iceland.

In 2006, scientists doing research on climate change, found this species of clam in a catch of 200 other clams.

By counting its rings of coloration, it was discovered to be over 400 years old. Scientists named it Ming. They pried its shell open to verify its age. The good news is that Ming was over 500 years old!

The bad news is that Ming died after being exposed.

But Ming has the short-lived distinction of being the oldest animal ever found alive on the face of the earth.

The rest of the story is that ocean quahog clams are harvested for food by the millions each year. They are known to live long and presumably happy lives.

Potentially, many diners in restaurants may have eaten a clam as old or older than Ming.

But, who will ever know?

Now what do you think of that!