Today, we have three mind-blowing sharks that will astound you. 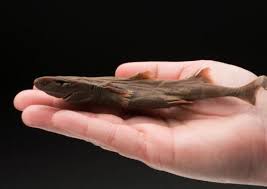 The Dwarf Lantern Shark is the smallest. It only grows to six inches long (females are slightly larger). It likes to hang out deep in the ocean around 1,000 to 1,500 feet below the surface near the coast of South America.

The head of this shark is long and flattened and takes up one-third of its body. Because this shark lives in mostly darkness, its eyes are large and elongated.

This shark can also glow in the dark which makes them bioluminescent. This ability comes from its light-emitting organs (called photophores) that run along its belly and fins. These help them camouflage when they feed in shallower water.

How does it work?

Its lit-up belly blends in with sunlight streaming down from above when a predator is looking up. In darker water, the light attracts smaller animals, which the shark preys upon. It will also become invisible to the predators that swim below them (glowing belly masks the silhouette of the shark when looking from below).

Fun Fact: No one really knows how long the Dwarf Lantern Shark lives.

The Cookiecutter shark is fearless and small (20-inch). It can take on giants like whales

and larger sharks, and have even been known to mistakenly try to bite submarines. They dwell in the deep warm ocean waters of the Atlantic and Pacific oceans. They can be found at depths of 3,200 to 12,100 feet.

Cookiecutter sharks approach their victims from below. They then latch on with their suction cup style lips, bite and then twist. A nice, round hole is left as a souvenir on its victim.

Like the Lantern Sharks, Cookiecutter Sharks have light-emitting organs, called photophores, on the underside of the body.  These can produce a continuous greenish light or a strobe-like, flashing light. Bioluminescence is used mainly for the attraction of the prey.

Fun Fact: The Cookiecutter Shark is able to emit light up to 3 hours after death.

The Greenland Shark is one of the largest. It can reach up to 23 feet long and weigh in at 2,260 pounds. This species swims very slowly through the freezing waters of the Arctic searching for a meal of fish, although they occasionally eat reindeer, polar bears, and other mammals that fall through the ice above them.

But perhaps their coolest feature is their longevity – females are thought not to reach sexual maturity until 150 years.

What do you think of these amazing sharks? Give us your “fintastic” thoughts in the comments section.