Andrew Carnegie and The Elephant Who Crossed the Bridge!

Once upon a time in Scotland, the land of Leprechauns and rainbows with pots of gold at the end, there lived a poor boy. In 1840, there was a great famine (no food) so, he and his parents came to Pennsylvania, America, where little Andrew would eventually became the second richest man in the world.

The Times, They Were Changing – Railroads, Camera’s, Telephones…and More!

America had already invented the steamboat, discovered gold, and invented the locomotive train. The country was recovering from a brutal civil war between the North and South. In Andrew’s time, America would build a railroad across America ‘from sea to shining sea.” They would also enter the oil industry, and invent the camera, the telephone, and the electric light bulb.

And most important of all – Levi Strauss invented “blue jeans” from the canvass of covered wagons!

The Age of Machines – “The Iron Horse!”

Iron machines were invented to do the work on farms, in factories, and buildings. Transportation was needed to move these manufactured goods across America to consumers eager to have them.

The train, named by the Indians, “The Iron Horse” was busy ‘chugging’ down the tracks hauling these “suddenly essential’ items to their destinations. 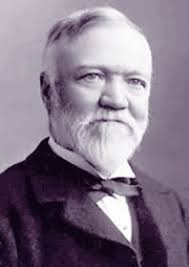 The young lad from Scotland worked hard and was smart about business. By 1865, he owned the Keystone Bridge Company. At that time, it had been discovered that the mixture of iron and carbon metals from the earth, when heated at very high temperatures, resulted in steel, a much stronger building material. But it was expensive until an inventor made a process to manufacture steel faster and cheaper.

In 1867, Carnegie sets out to do the impossible. Build a road-railway bridge across the wide waterway of the Mississippi River to St. Louis. It was the longest bridge ever and the first time to use steel on a large scale. The bridge would not only span the river, it would link the East of America to the Western Frontier.

The Bridge That Was Almost Not Built – “We’re Not Crossing THAT!”

After many problems, frustrations, and financial woes, the bridge was completed seven years later and ready for the first public ‘crossover.’ At that time, one in four bridges failed and dropped the trains, passengers, and cargo into watery depths. People were skeptical (not convinced) of this new steel building process and not so willing to be the first to try it out.

But Andrew Carnegie had courage and confidence in his bridge. He had read somewhere that ‘due to their natural instincts, elephants would not walk across foundations that were unstable’. On the opening day of the bridge, the public gathered to see what would happen. Andrew and the Circus Elephant led a parade across the bridge.

The Elephant stepped lively and never hesitated. And the people followed. Andrew had succeeded in building his bridge and saving his reputation.

Is the Bridge Still There Today?

Yes. We are happy to say that the bridge is still standing strong and in use today, well over a hundred

years later. It is named “The Eads Bridge,” after the man who designed it, but it is the Bridge Built with Carnegie Steel.

What do you think about Andrew Carnegie and his amazing work? Tell us in the comments section.

You can also do some amazing work with our elephant coloring page. Just click, print, and paint. It’s super-cool!

Educators, be sure to check out our Elephant worksheets PDF in Curriculum Corner!