Sports have been around in one form or another for centuries. In fact, the first Olympics, in 760 B.C., had only one event, a footrace. Today, sports span the globe with games like soccer, football, baseball, hockey, and basketball being among the most popular.

But did you know there are other sports that are far from “normal?”

From cheese rolling to extreme ironing, toe wrestling, and underwater hockey, these weird, wacky sports will leave you “cheering for more.” 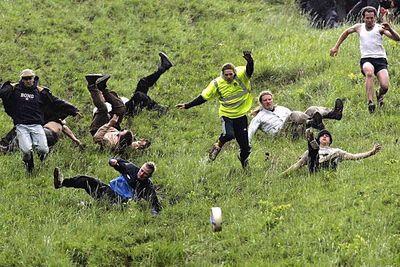 At Cooper’s Hill in Gloucester, UK, people gather each year for the traditional Cheese Rolling competition.

Here’s how it works; a large cheese wheel is released from the top of the hill, then participants race after it.

The “top cheese” is the first person to reach the bottom. Although this weird, wacky sport may not sound dangerous, there have been many injuries due to the steepness of this “cheesy” hill.

Most people hate ironing. But in this weird, wacky sport, people take their wrinkled clothes to new heights.

Called “Ironists” these competitors look for all sorts of remote and odd locations to finish their laundry. These places include on top of vehicles, windsurfing, skydiving, and even underwater.

Dating back to 1976 (when the Brits were looking for a sport to gain a World title in), toe wrestling can really “sock it to ’em.”

How it works is competitors take their shoes and socks off, then go toe-to-toe to see who can pin down their opponent’s foot.

Alan ‘Nasty’ Nash is the current reigning champion with 14 World titles in the shoe…err...bag.

There’s nothing like a rousing game of hockey to get your blood pumpin’. But some folks don’t like the icy conditions that hockey entails. So what do they do? They go underwater, of course.

Known also as “Octopush,” this “drippy” sport is all the rage. The ‘goal’ of the game is to push a puck across the bottom of a swimming pool (using a smaller stick) into the opposing team’s net.

Underwater hockey has become so popular that it now has its own World Championship which first took place in 1980.

Playing sports is a great way to get some exercise, make new friends, and show off your competitive edge. Whether you win or lose, you’ll always be better for just playing the game. So get out there and embark on your own weird, wacky sport.