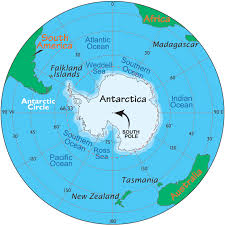 In an area with only the combined size of the United States and Mexico, Antarctica has 90% of all ice on Earth.

When compared in size to the other six continents, this frigid region around the South Pole comes in fifth.

Can you name the seven continents of the world? – here’s a hint: Asia, Africa, North America, South America, Antarctica, Europe, and Australia.

Averaging less than 6 inches of rain each year, the extreme cold, dry, and windy habitat 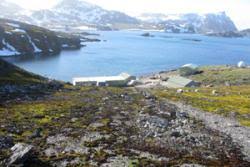 of Antarctica would appear to be barren of flora (plant life). The little moisture that does manage to fall, usually as snow, does not soak into the ground – it piles up.

But, in this frozen water, a certain persistent organism called algae (with no roots or leaves) lies dormant, waiting for the Antarctic summer. 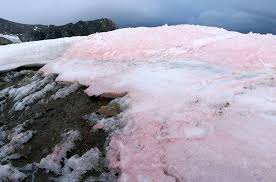 Although Antarctic winters range in the minus 60 degrees, summers are only a cool minus 16 degrees. But this is enough warming sunlight to trigger the tiny spores of a type of aquatic algae.

In the same family as green algae, this algae strain produces flower-like blooms in hues from pink to blood red.

The colors streak the glaciers and dye the snow. Also called ‘raspberry snow’ and ‘jam’, it is definitely not to eat!

What’s Going On With Red Snow? 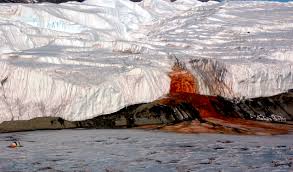 These colors in the algae rob the snow of sunlight. The snow reflects less sunlight and melts faster, which produces more algae. And so, the cycle of tinted red snow goes on…freeze, warm, melt, bloom…

Snows of a Different Color

Gray or black snow is not good because it indicates that chemicals in the air have polluted the snowflakes as they fall.

Other snows can fall in colors of orange or brown due to the presence of sand and dust particles.

A type of yellow algae can cause yellow snow. But snow can be yellow for another reason. And, as every kid with a dog knows, you never make a snow angel in yellow snow!

Winter is wonderful, but Spring is so cool! Look for ‘Spring Things’ about people, places, and all things animal in your upcoming editions of Smarty Pants Magazine for Kids – of all ages!